A Song of the Woods

“My leaves are turning crimson,” the giant oak tree said,
“It’s almost time these children should seek their winter’s bed,
But how they still cling to me and gleam with crimson hue,
They truly are more lovely than cirrus clouds of blue.

“And now throughout the forest – list! hear their voices ring,
But ’tis in tones of sadness and sighing they now sing –
‘Alas! ’tis gone, fair summer, and winter’s reign is near,
He cruelly strips the forest of all her summer cheer
By killing all her lovely leaves and likewise flowers gay
And driving all her fairy folk to homes of far away.'” 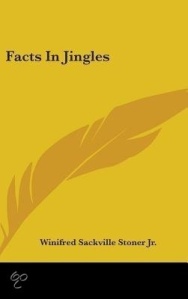 Winifred Sackville Stoner, Jr.( (1902–1983) is especially known for poems, rhymes and mnemonic jingles that aid in the recollection of information. One of her best known poems is entitled “The History of The U.S.”, which some people may be able to recite, verbatim, but which most know only by its first two lines:

“In fourteen hundred ninety-two, Columbus sailed the ocean blue
And found this land, land of the Free, beloved by you, beloved by me.”

Stoner’s personal life did not see the same success as her intellectual life. In 1921, at age 19, she married a 35-year-old French count, Charles de Bruche, who was supposedly killed in a car accident in Mexico City in 1922. However, de Bruche reappeared in 1930, and Stoner appealed for an annulment of the marriage. She apparently already knew before the faked death that her husband’s actual name was Charles Clinton Philip Bruch, a penniless impostor with a criminal record who was a known con man and wiretapper. He also went by the name “Count Helmholtz.”She then married Louis Hyman, but that marriage fell apart and ended in divorce. Reports surfaced of an engagement to Bainbridge Colby, a former US Secretary of State under President Woodrow Wilson, who was then 58 years old to her 24. She later described him as “my mental mate.”

Between the 1930s and her death in 1983, she rarely stepped into the spotlight.