Marge Piercy has written 17 novels including The New York Times Bestseller Gone To Soldiers; the National Bestsellers Braided Lives and The Longings of Women, and the classics Woman on the Edge of Time and He, She and It. Among her 19 volumes of poetry the most recently published include Made in Detroit (Alfred A. Knopf, 2015) and The Hunger Moon: New & Selected Poems 1980-2010. Her critically acclaimed memoir is  Sleeping with Cats. She has published four nonfiction books including Pesach for the Rest of Us and My Body, My Self.

Born in center city Detroit, educated at the University of Michigan and Northwestern, the recipient of four honorary doctorates, she is active in antiwar, feminist. anti-nuclear power and environmental causes.

A popular speaker on college campuses, she’s been a featured writer on Bill Moyers’ PBS Specials, Prairie Home Companion, Fresh Air, the Today Show, and many TV and radio programs nationwide including Air America and Oprah & Friends. Her poems are read frequently on Garrison Keillor’s The Writer’s Almanac.

Praised as one of the few American writers who are accomplished poets as well as novelists — Piercy is one of our country’s best selling poets — she is also the master of many genres: historical novels, science fiction (He, She, and It won the Arthur C. Clarke Award for Best Science Fiction in the United Kingdom), novels of social comment and contemporary entertainments. She has taught, lectured and/or performed her work at well over 400 universities around the world. Her work has been translated into 21 languages.

“Marge Piercy is not just an author, she’s a cultural touchstone. Few writers in modern memory have sustained her passion, and skill, for creating stories of consequence.”

Recently TTR caught up with Piercy, who lives on Cape Cod.

TTR: Which of your 17 novels do you consider your personal greatest success…not necessarily commercially, but for you personally as a writer-? Was there one that made you say “Yes- I captured it!”

MP: I don’t have a favorite novel.  What I can say is that I vastly prefer and am much prouder of the less conventional novels – WOMAN ON THE EDGE OF TIME, DANCE THE EAGLE TO SLEEP, GONE TO SOLDIERS, HE SHE AND IT, CITY OF DARKNESS, CITY OF LIGHT, BRAIDED LIVES and SEX WARS.  I am less proud of the more conventional novels that focus primarily on relationships, although I am invested in them also.

Some of those are historical novels concerned with how we got where we are; some are speculative fiction concerned with ‘if only’ and ‘if this goes on’ (to use Isaac Asimov’s categories of science fiction).

BRAIDED LIVES is a free exploration of themes from my own early life, not truly an autobiographical novel but an extrapolation.  There is an element of play in all of these novels, more research (in both the speculative and the historical novels, a huge amount of research, years of it) but also more freed imagination.

I think I pretty much exhaust much of my impulse toward autobiography in my poetry, although I do have the one memoir I think is a good job, SLEEPING WITH CATS. I tried in writing that to be as honest as I could, an activity I don’t recommend to anyone who enjoys a good night’s sleep.

I discovered, among many other revelations, that I’m not as good a person as I had imagined.  Examining one’s own life is a critical nightmare if you’re not trying to make it pretty. 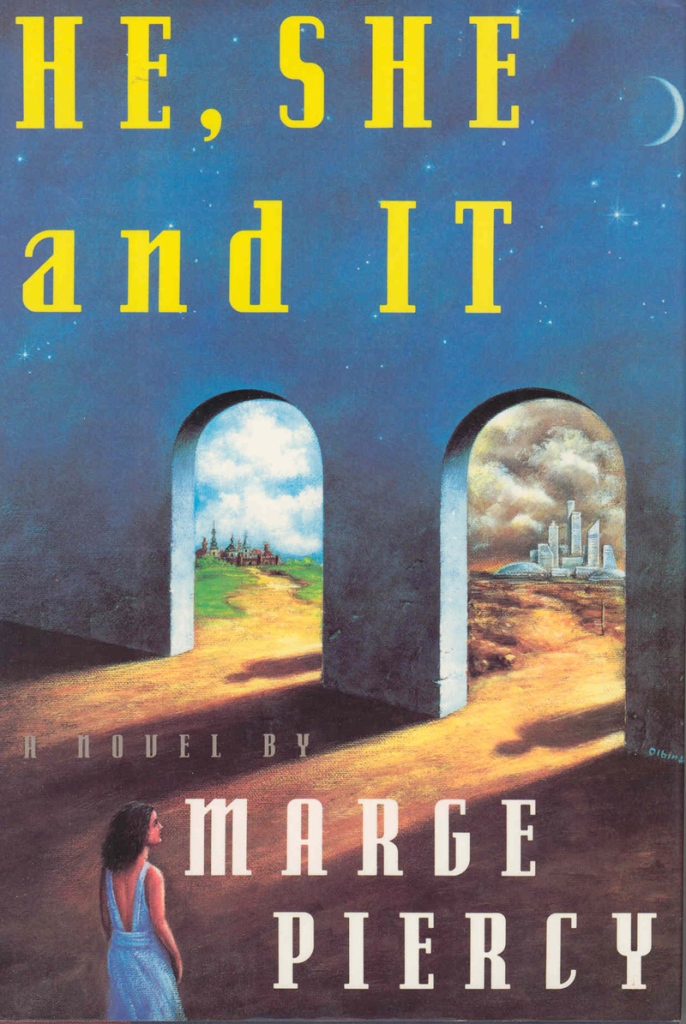 TTR:  Of He, She and It, which won the Arthur C. Clarke award, Adrienne Rich once said:

“Piercy’s vision of a post-greenhouse-effect, nuclear-blasted world interlaced with the Prague ghetto of 1600, and the efforts of certain people to stay human in both, is threaded with the questions: What is it to be human? … What does `life’ mean? What are the limits of creativity? As always, Piercy writes with high intelligence, love for the world, ethical passion and innate feminism.”

MP: I had read the scientific papers about climate change when I was writing the novel; however, global warming has moved so much faster that my projections were a little optimistic.  We have orca off Cape Cod this summer besides increasing numbers of great white sharks.  A manatee was swimming in one of the south facing harbors.  We have had the worst drought I’ve ever experienced in my 45 years of living here.  Trees and shrubs are dying.  The grass is all straw.  Mice keep coming into the house where there are four cats because they need water.  We have moved from zone 6 to zone 7 agriculturally.  Massachusetts is experiencing an increasing number of tornadoes.  We worry about hurricanes.  There are far fewer butterflies and warblers and far more flies. 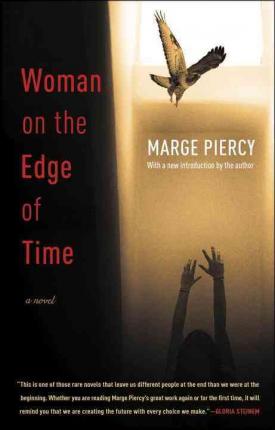 The ethical issues about artificial intelligence have only grown, as has our intimacy with and reliance upon the internet, social media and our other interactive devices.  Corporations have greatly increased their control with Citizens United and super pacs.  Elections have become sound bites and info-mation.  The huge multicorps are obviously non-national.  The gap between the few with huge wealth and those barely getting by has increased exponentially. The middle class is shrinking; people have not only less money but less power.  Fewer and fewer workers are unionized.  Aging nuclear power plants are endangering a high percentage of the population of this and European countries like France, and of course Japan.

All in all, the world of HE, SHE AND IT is becoming reality much faster than I imagined.  But I was prescient enough to be glad I’m eighty.  Dystopia is coming fast, perhaps on the wings of Trump (demons have wings, just as angels do). 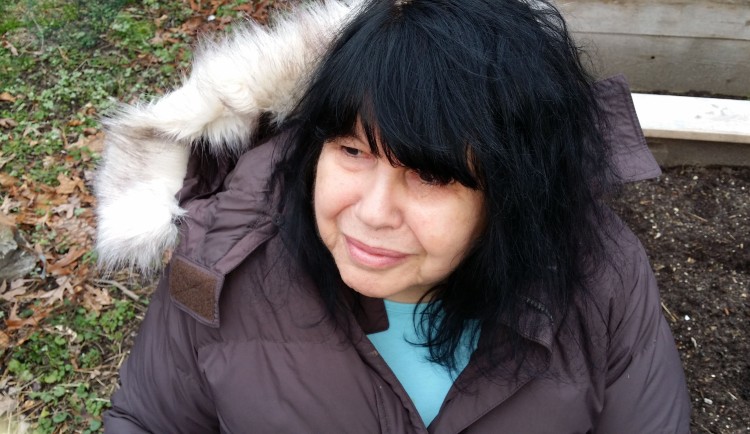 TTR: You’ve turned 80; you’re quite prolific, with many novels, 18 poetry collections, a memoir, and so much more under your belt. You are considered by many loving readers as iconic. What advice would you give your younger self, just starting out?

MP: Don’t take writing teachers too seriously.  Learn what you can from each and don’t be surprised when the next one totally contradicts what the last one told you.

I was part of an anti-racial group of young writers in Chicago when I was working part-time jobs for peanuts, and unpublished except for a scattering of poems.  Without their feedback, I wouldn’t have stopped writing, but I would have been more discouraged by rejection and less sure of what I was trying to do.  That kind of group helps to keep you going.  You need feedback and that’s a helpful place to get it.

Read, read, read, read in the genres that excite you.  But read like a writer, which means study what works and why and what doesn’t work and why.  Look critically at all the craft elements in whatever you’re reading.  See how the writers solved or didn’t the issues of craft in that novel, short story, memoir or poem.

Don’t try to reinvent the wheel.  See what other writers in your desired field are doing, successfully or unsuccessfully.  Learning craft elements from other writers is not imitation.  Your voice is, or ought to be, your own or that of your characters; your stories are yours to tell. But the way other writers use dialogue to create character, for instance, is a craft element you should be examining as you read. There are so many craft elements you have to be conscious of when you’re starting out that become second nature when you’re a more experienced writer.

IN POETRY, FOR INSTANCE, STUDY HOW OTHER POETS BREAK THEIR LINES…SOME ARE MUCH BETTER AT IT THAN OTHERS.  SEE HOW THEY INDICATE PAUSES IN A LINE THAT THEY WANT.  READ ALOUD TO HEAR HOW LINES ARE PUT TOGETHER, NOTICING FOR INSTANCE THAT TOO MANY UNACCENTED SYLLABLES IN THE LINE WEAKEN IT AND MAKE IT SOUND JUST STRUNG TOGETHER. THERE ARE ELEMENTS YOU NEVER STOP LEARNING ABOUT AND OTHER ELEMENTS THAT YOU MASTER AND THEN JUST USE.

Don’t take rejections to heart.  Often you’re sending to someone who only publishes people they’ve heard of, or their friends.  Just keep sending out.  When you’re published anyplace, it makes it easier to get published – somebody voted for you.  Take every opportunity to read and improve your reading style.  By giving readings, you get feedback. Writing can be a lonely business so getting your work out to an audience can be a boost to your confidence.

Hold on to your politics and your identity.  Don’t take critics seriously.  They are always building their aesthetic on what has been done, not on what you want to do.

For more about Marge Piercy, see her full autobiography and visit her official website at www.margepiercy.com.