The essayist Phyllis Theroux says “to send a letter is a good way to go somewhere without moving anything but your heart.”

Writer and presidential speech crafter Liz Carpenter has similarly lamented ; “What a lot we lost when we stopped writing letters…”

We dwell in a world where print and cursive have become tweets valued for about as long as it takes to snap the average selfie. Quick-fix social media blasts are the norm and the art of the well-wrought letter may seem forever lost.

Fortunately for those of you who miss the art and craft of an old-fashioned letter, there’s a fresh gathering of hand-illustrated childhood missives you won’t want to miss…and just in time for the holidays.
If you have a special Christmas-lover in your life who’s homesick for the holidays of yesteryear, Letters to Santa Claus

(Indiana University Press 2015) is a must-have collection of charming vintage epistles to St. Nick himself.

Pat Koch and Emily Weisner Thompson of The Santa Claus Museum and Village (in Santa Claus, Indiana) have collected over 250 original letters and envelopes dating back to the 1930’s.
These hand-wrought letters, primarily crafted by children (and also a few adults) range from the several-pages-long capitalistic demands you’d expect to find, to modest, selfless requests that tug at the soul and create a fascinating portrait of life in decades past . It was a time when carrying a three-ring-binder at school was still an everyday thing.

A letter from Mare dated 1955 is particularly poignant in today’s world. Penned on a sheet of notebook paper it simply states;

“I’m a little girl 5 years. My mother and father are displaced persons and they can’t buy me all I’m wishing. But I will hang my stocking over the fire-place. There will be a present in it for you.”

During the depression of the 1930’s, another little girl named Catherine, of Davis Avenue, Woodstock MD. writes in dire poverty;

“Please bring me a pair of warm gloves and for John a pair of shoes size 1 and for Claire some warm underwear and for Joe stockings size 10 and for Rose gloves for 12 years old becuz we are poor and got no- no {sic} need for toys or candy…the others are dead. ”

In 1949, Maria Hartzell, using her wonderful lined red and cream fairytale stationary, simply wants Santa to send a picture of the brownies at work.

The story of how these literary treasures were amassed is as wonderful as the letters themselves.
“Head Elf” Pat Koch tells the story of her father Raymond Joseph Yellig, who served in the Navy during World War 1. While stationed in Brooklyn Yellig was asked to play Santa Claus for a party given for a group of underprivileged children. The experience was so important to him that he vowed if he made it through the war he would always be Santa Claus. Yellig survived, came home, and married Koch’s mother, Isabelle.
Pat Koch says,

“He worked at Santa Claus Land for nearly forty years and listened to the Christmas wishes of over one million children. He appeared in radio programs, parades, print ads, and game shows.”

“Every year, children from across the United States mailed their letters to Santa Claus, and those letters turned up in Santa Claus, Indiana. Postmaster Martin was trying to respond to every letter that arrived. He needed help, and my father was more than happy to give it. He’d bring boxes of letters home, and years after his death, I was still finding letters he’d answered scattered throughout the house.
My own involvement with the Santa letters began in 1944. I started helping my father answer letters when I was twelve years old. I remember my mother admonishing him to move the tablecloth out of the way before he upended bags of letters and started writing –she didn’t want ink all over her furniture.”

Koch continues her father’s legacy to this day. 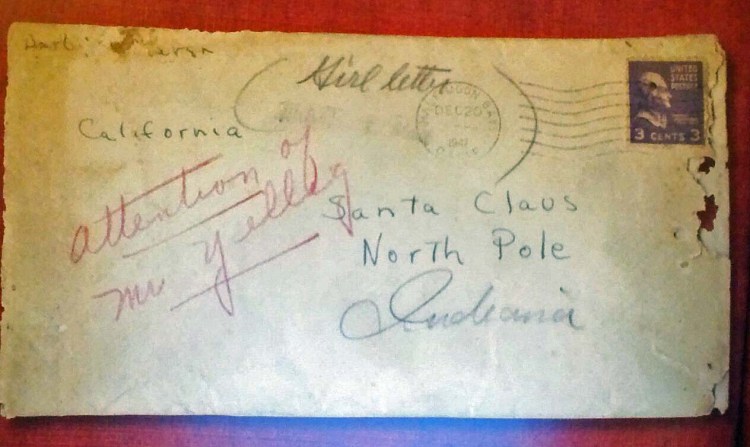 Perhaps a little boy’s illustrated letter written sometime after 2010 embodies this spirit best of all, in asking for gifts not for himself, but for some orphans.

“I used to be one of these kids and I know how it felt to not have any presents. But most of all I want them to grow up like me with a family. So can you give them clothes…coats and coveralls…I would rather you give them clothes and such rather than you give me presents and toys because they are more important than me.”
Sincerely,
a good kid- Sergei

Letters to Santa Claus is an essential read for anyone needing a quiet break from the commercial hoi-polloi of the malls. It brings back not only the fond nostalgia of Christmas past, but also gives a gentle reminder that our most profound holiday memories are childlike.

Nothing is as magical as the tangible hope of a child’s painstaking letter.

When we are very young we send these with faith into the winter void in hopes of a reply, with belief just as natural as breathing. Yes, these letters contain a plea for some toys, but so much more often it’s for family. For warmth. A home. For loved ones to be happy and well. Letters which ask for something on another person’s behalf.

At a time in this world when it’s easy to question our moral integrity as a human family,  Letters to Santa Claus

(Chronicle Books 2015 ).
Brew a cup of tea, curl up, watch the late snowfall, and enjoy the quiet Christmas joy of Letters to Santa Claus. Perhaps even pen your own letter and send it, however young you may be.
You’ll be very glad you did.

2 thoughts on “Letters to Santa”